Benefits of Omega 3’s for Athletes

Learn about the top researched omega 3 benefits for athletes, plus tips for obtaining adequate amounts in your daily diet! 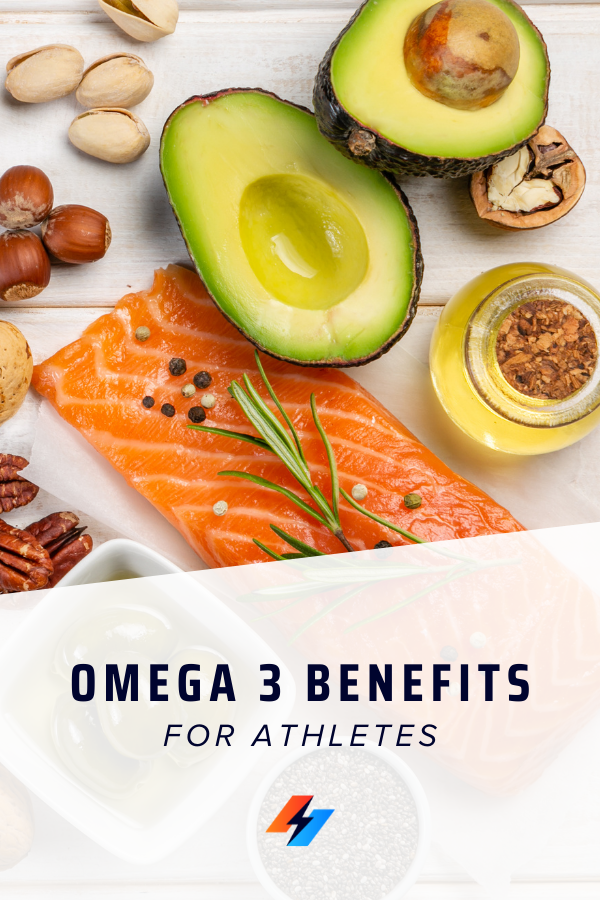 For athletes constantly looking to improve endurance, build muscle mass, and enhance performance overall, the growing body of research supporting a link between omega-3 intake and sports performance is compelling. So far, studies have shown that adequate amounts of omega-3 may reduce muscle soreness, stimulate muscle growth, help the body better adapt to exercise, and even provide cardiovascular benefits for endurance athletes. Read on for an overview of omega-3 benefits for athletes, plus tips for obtaining adequate amounts in your daily diet (or through supplementation when necessary).

Omega-3s are essential fatty acids which must be consumed through diet, as our bodies are not able to synthesize them. The two key forms are docosahexaenoic acid (DHA) and eicosapentaenoic acid (EPA), which can be found in fish oil, algae oil, or in fatty fish such as salmon, tuna, sardines, cod, and mackerel. EPA is known for its role in supporting our immune systems and heart health, while DHA is beneficial for brain function and development. Additionally, plants contain another form called alpha-linoleic acid (ALA), which our body can then convert into the more useful forms, EPA and DHA. ALA is found in chia seeds, flax seeds, canola oil, walnuts, hemp seeds, soybeans and more. However, the most current research indicates that the conversion rate of ALA to EPA/DHA is low (~5%), meaning much larger quantities of ALA are necessary to reap the benefits.

The Academy of Nutrition and Dietetics recommends 500mg DHA + EPA, which is about the equivalent of eating 4oz fish twice per week. However, according to the International Olympic Conference, athletes may need 4x as much DHA and EPA as the general public (~2000mg per day). Unlike omega-6s, which are found in foods like peanut butter, eggs, vegetable oils, and other items prevalent in the standard American diet, omega-3s are often under-consumed. Further, athletes with increased needs often fail to meet even the general recommendations. In fact, a recent study revealed that almost 95 percent of NCAA Division I athletes fall short of the general recommendation to consume 500mg DHA + EPA per day.

While more research is needed to deepen our understanding of omega-3 benefits for athletes, there is promising evidence for a role of omega-3s in inflammatory responses, recovery, muscle growth, and endurance performance. A brief overview of each of these potential benefits is provided below!

Adequate omega-3 intake is associated with decreased inflammatory responses in the body. During exercise, oxidative stress occurs which can lead to muscle fatigue, and in the case of more strenuous activity, chronic inflammation. Therefore, it is believed that omega-3s may play a role in combating the excess stress that athletes face from regular intense exercise.

Research suggests that omega-3 supplementation may provide benefits for recovery by reducing muscle soreness following training. In a recent study, 14 healthy males were randomly assigned to receive an omega-3 supplement daily for 4 weeks, or a placebo. At the end of the trial, muscle soreness was significantly lower in the omega-3 group than the placebo group 24 hours post exercise. Additionally, IL-6 (an inflammatory immune protein) was increased in the placebo group following exercise, but not in the omega-3 group.

It is also theorized that omega-3s play a role in facilitating muscle growth by increasing muscle protein synthesis (MPS), which takes place when your body uses the protein you consume to repair and rebuild muscle. When the rate of MPS exceeds the rate of muscle breakdown from exercise, muscle growth occurs.A small study revealed that daily supplementation with 4 grams of fish oil for 8 weeks in healthy adults increased the subjects’ MPS response to both insulin and amino acids, which are released in the body during exercise. This indicates that increasing omega-3 intake may improve your ability to build and maintain muscle.

Omega-3s have also been shown to improve athletic performance by helping to widen the blood vessels, increasing flow of oxygen to muscles during exercise. In one study, sixteen well-trained cyclists who received 1g fish oil per day over the course of 8 weeks showed decreased exercise heart rates and whole-body oxygen consumption in comparison to the placebo group, indicating that omega-3 may improve endurance capacity. This provides an advantage for competitive endurance athletes, as your body will essentially require less oxygen to perform.

When to Consider Supplementation

Despite the promising evidence that omega-3s may aid in athletic performance and recovery, the overall recommendations for post-workout nutrition including adequate fluids, carbs, and protein, should still be the focus. Athletes should aim to meet their omega-3 needs through whole food sources, as they offer additional nutrients that supplements do not. For example, a single serving of salmon (4oz) not only contains omega-3s, but also provides protein, vitamin D, and several B vitamins.

However, there are cases in which omega-3 supplementation may be beneficial. For instance, since our conversion rate of plant omega 3s (ALA) to the beneficial forms (DHA/EPA) is low, vegan and vegetarian athletes often struggle to hit the recommended amount of omega 3s through diet alone. Thus, these athletes may find it beneficial to supplement with algae oil, a rich source of omega-3s.

Omega-3 supplementation may also serve a purpose for athletes who are recovering from injury, as they are experiencing additional stress and inflammation. Studies show that omega-3 supplementation may be effective in the prevention and/or treatment of traumatic brain injury (TBI) resulting from concussions. In a study of NCAA Division I football players, athletes taking DHA experienced decreased concentrations of NFL, a significant biomarker of head trauma.

Athletes who are currently following a vegan or vegetarian diet or who are recovering from an injury should seek help from a sports dietitian to determine if supplementation is necessary. If choosing to supplement, it is important to select products that hold third party testing certifications, such as NSF Certified for Sport or Informed Choice, especially for drug tested athletes. Third party testing verifies the quantity and ingredients to ensure the product contains what it says it does in the amounts stated. For example, Nordic Naturals Ultimate Omega is NSF Certified for Sport, making it a reputable choice for athletes.

Julia is a former collegiate lacrosse athlete, currently working towards her master’s degree in Rowan University’s Coordinated Program in Dietetics, to eventually become a registered dietitian. Upon graduation, she plans to work with athletes to help them adopt a sustainable approach that allows them to fuel their body, and maximize their potential. 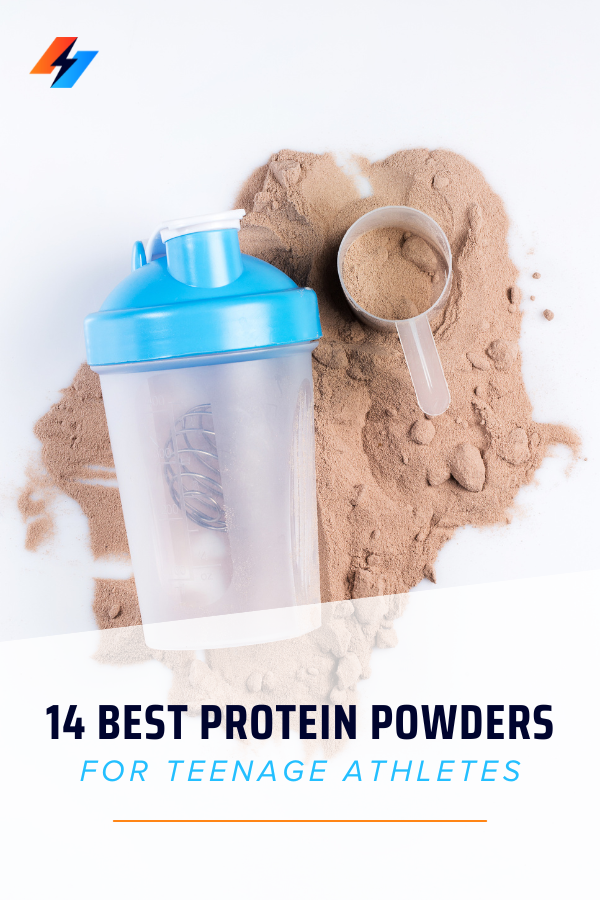 Look no further to learn about the best protein powder for young athletes. We cover safety, quantity and the 14 top picks from sports dietitians. 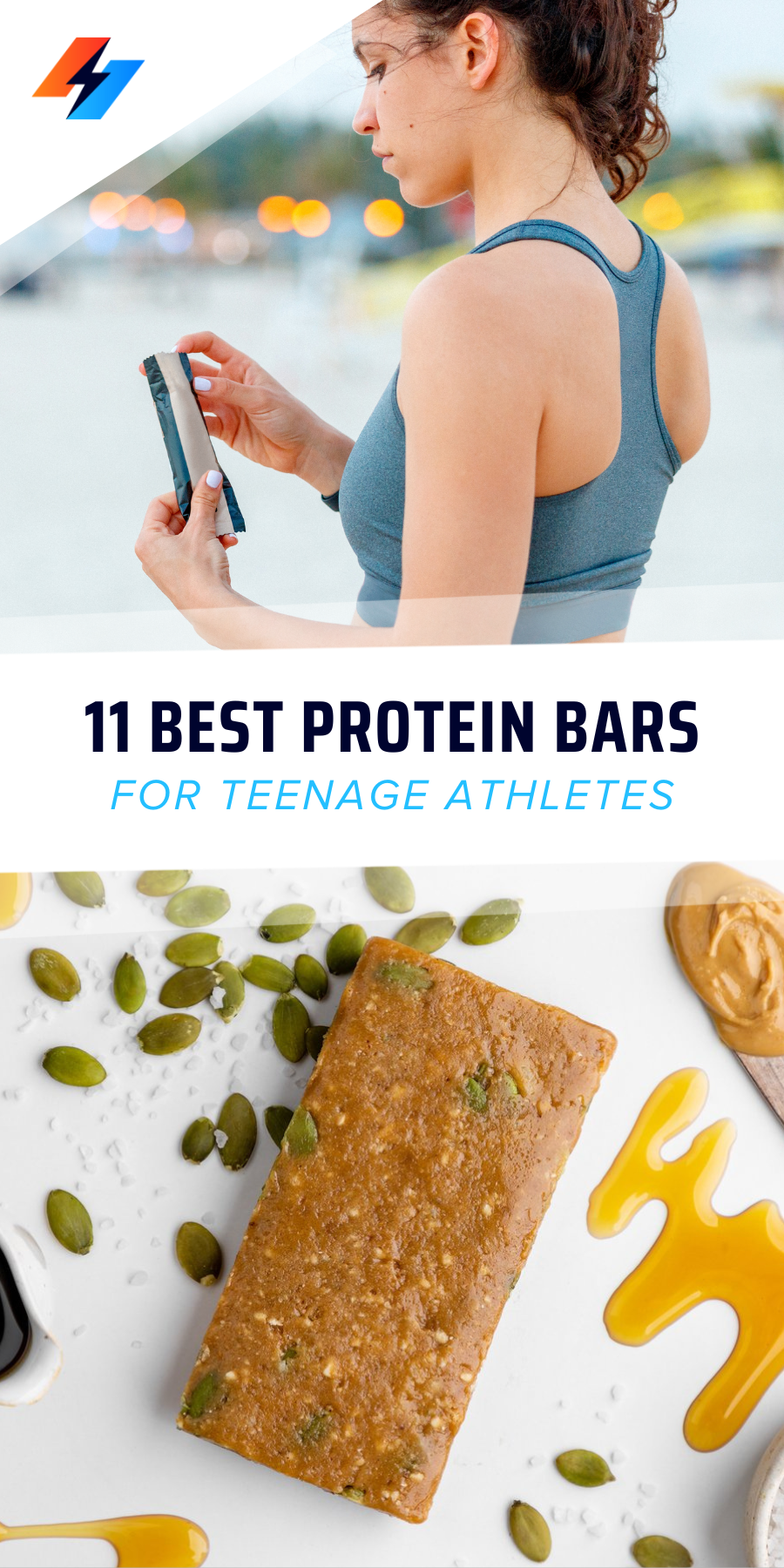 This list of the best protein bars for teenage athletes is sports-dietitian approved to ensure you’re energized and supporting recovery. 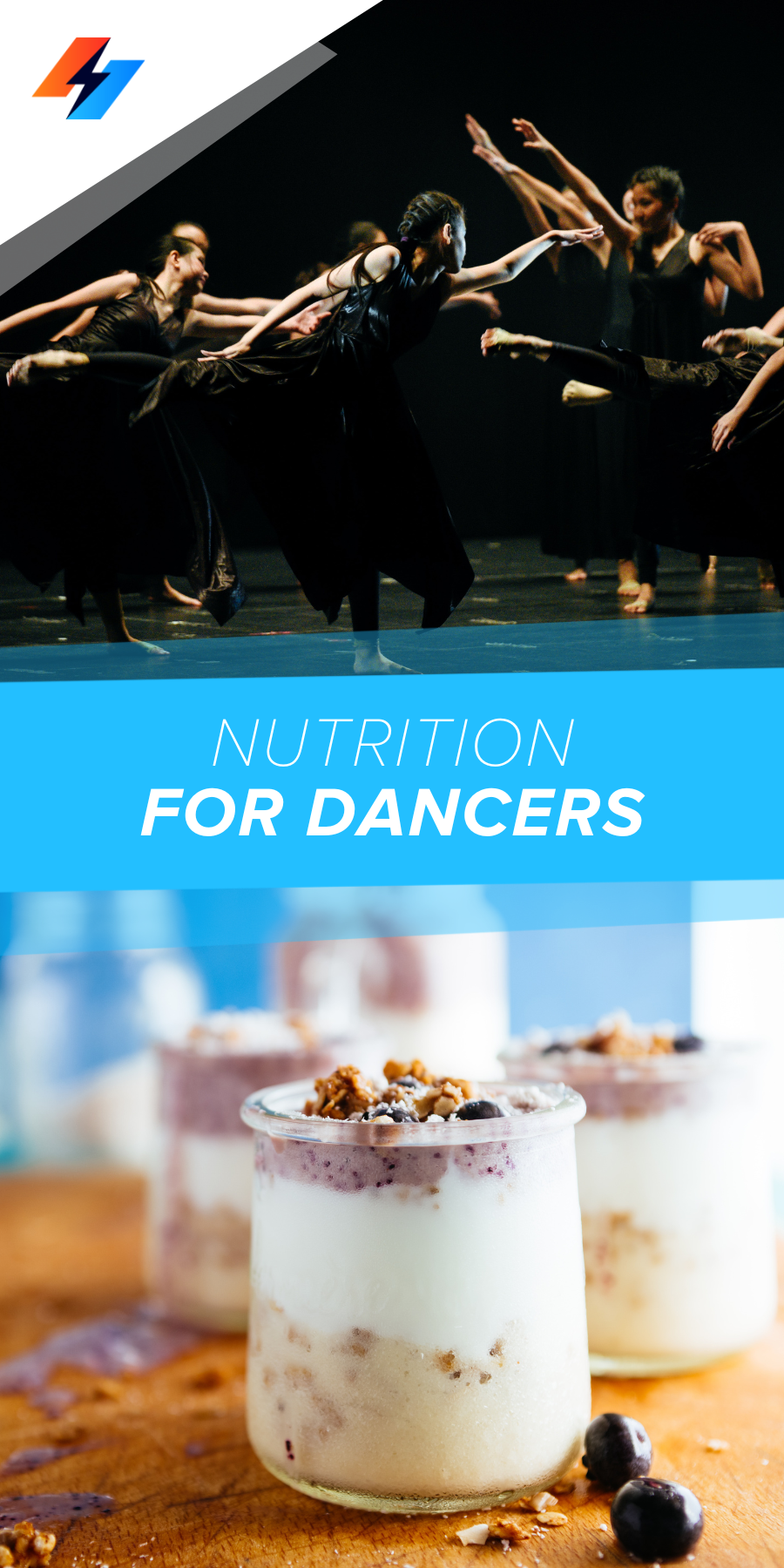 Learn how to optimize dancer nutrition before, during, and after a training session with these tips! 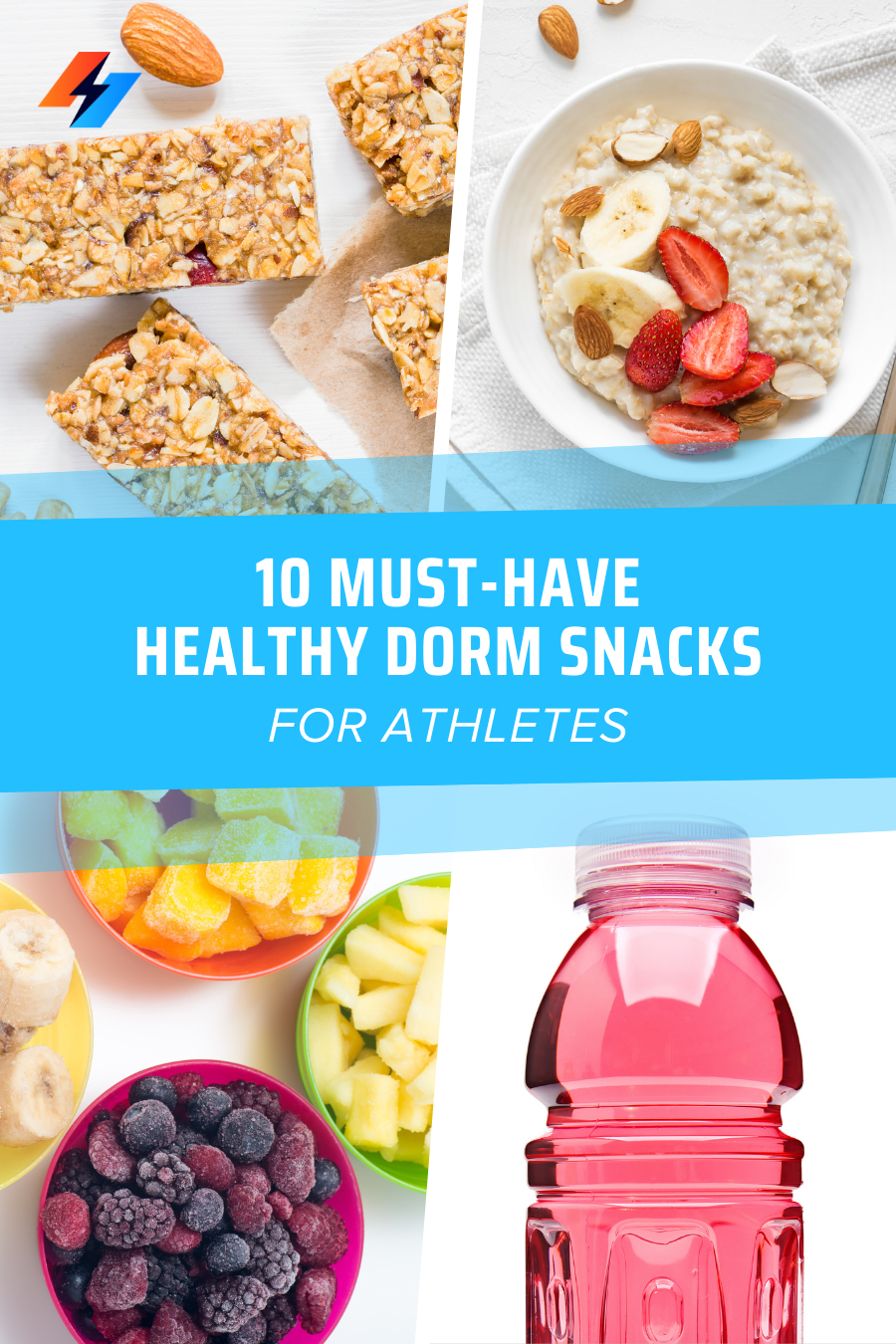 These 10 healthy dorm snacks will keep you fueled and energized between training sessions and classes on your busiest days.

connect with us for more!

Duplication of any content on this site is strictly prohibited without written authorized permission from the owner. This includes but is not limited to downloads, articles, and recipes. For more information: www.copyright.gov/legislation/dmca.pdf.